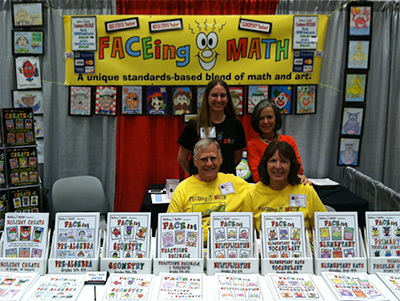 FACEing MATH began with a single worksheet that Kristin DeWit made for her high school Algebra students.  Kristin began her teaching career as a 4th grade teacher.  In 2000, she got talked into teaching high school, where she quickly realized that was her true calling.  However, when she went to the teacher stores to buy all the “fun stuff” that she used to buy for her 4th grade students, she quickly learned that there was not much to choose from for her high school students.  As a fan of drawing and coloring, she made her first FACEing math worksheet.  Her students loved it and she shared it with some of her math colleagues as well.  They asked for more and pretty soon she had several FACEing MATH worksheets.  Her family and colleagues encouraged her to turn the worksheets into a book and in 2007 she printed her first book.  It started selling well and the rest is history!

Kristin DeWit is currently a full-time mathematics teacher at Hemet High School in Hemet, California.  She graduated summa cum laude from Azusa Pacific University with a Bachelor of Arts in Mathematics.  Kristin then earned her Master of Arts in Education with an emphasis in teaching from Azusa Pacific.  Her first teaching job was in West Covina, California where she taught fourth grade and loved it.  One year later Kristin, and her husband, moved back to Kristin’s hometown of Hemet where she hesitantly accepted a mathematics teaching position at the high school she graduated from, Hemet High.  Kristin discovered that high school students were not as scary as she first thought and soon realized that they even enjoyed some of her “elementary” teaching tactics.  Kristin feels lucky to be supported by a great group of teachers, administrators, and students.   In 2006, Kristin was honored to receive the Riverside County Mathematics Teachers Association Outstanding High School Mathematics Teacher of the Year award.  In 2008 she was selected as the California League of High Schools Educator of the Year for Region 10.  In 2013 she received the Crystal Apple Award, which meant a lot to her because senior students choose the recipient.  Kristin would like to thank her husband, parents, and sister, who are all teachers, for their support and encouragement throughout her life.

Mike DeWit has taught a variety of math classes throughout his teaching career.  Mike graduated magna cum laude from Azusa Pacific University with a Bachelor of Arts in Psychology.  While majoring in Psychology, Mike took many math classes and shortly after graduation he received his Single-Subject teaching credential in Mathematics.  Mike began his teaching career at Kucera Middle School in Rialto, CA.  He also taught at Arcadia High School, Hemet High School, Helen Hunt Jackson (an independent studies school), and Calvary Murrieta High School.  Mike also has a passion for Christian ministry and received his Master of Arts in Theological Studies from Westminster Theological Seminary in Escondido in May of 2008.  Mike enjoys spending time with his family, reading, and playing video games.  If you send a purchase order to FACEing MATH, chances are it will be Mike who will be assisting you.

Jennifer Deaton is currently writing books for FACEing MATH in Okinawa, Japan.  Jennifer earned her Master of Arts in Education with an emphasis in teaching from Azusa Pacific.  In 2006, she got married and joined her husband in Okinawa, Japan where she taught in the Department of Defense Schools for a year.  She was fortunate to be able to return to her same school where she taught Pre-Algebra and Algebra.  After several years as a mathematics teacher at DePortola Middle School in San Diego, California, Jennifer’s husband was deployed back to Japan.  Jennifer feels lucky to be supported by an amazing family and former colleagues and students that inspire her daily.  In 2008, Jennifer earned her National Board Certification in Adolescent Math.  She would especially like to thank her mom for her support.  Without “Mama” to watch her two precious toddlers, she would have never had the time to write her first book!  Jennifer enjoys strollerblading with her children and when time permits diving and spear fishing with her husband.

Carolyn DeMoss has taught school in California for thirty-eight years, including Special Education, GATE magnet and cluster classes, and mainstream elementary classes.    She graduated from California State University at Fullerton, then earned her Master of Arts in Education with an emphasis in teaching from Azusa Pacific University.  Her first teaching job was in Corona, California where she taught students with special needs.  Three years later Carolyn and her family moved to Hemet where she was Resource Specialist, later teaching 2nd, 3rd, and 4th grades.  She has been a Mentor Teacher for several years. 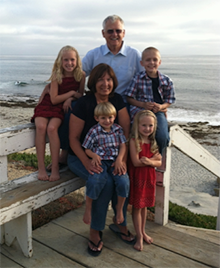 The BEST Sales Team Ever!

FACEing Math is supported by the BEST Sales Team EVER… Jim and Marilyn Barnes, Kristin & Jennifer’s parents.  Besides being the best parents and grandparents, Jim and Marilyn are both retired teachers and now enjoy traveling the country attending math conferences and selling books.  If you order a book from FACEing MATH, Jim has most likely filled it!  And if you order a Unit Circle Kit, chances are Marilyn has put it together!